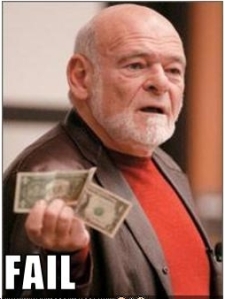 #Sam Zell was just featured on Squawk Box where he proceeded to state that if he was the owner of Zuccoti Park, he would have ousted and essentially evicted the #OccupyWallStreet movement because well, he doesn’t see the point. Wow! Who would if you are now sitting pretty (and bald) on top of BILLIONS, not millions, of dollars. Seriously, look him up on #Fortune magazine, he has made the Top-Rich list several times over.

I get it, self-made and all, that’s great, but to dismiss a movement because he doesn’t understand it, is quite close-minded and a great example of the major disconnect between the One-Percenters like him (“I did it so can you, lazy ass”) and the 99-Percenters who are protesting the financial gap because they are essentially feeling squeezed in some of the major areas of life– career prospects, overall financial stability, trust in government policy and regulation- and battling with what once was a blind commitment to a country that in some people’s view- has given them the complete financial shaft.

Zell then said that the Zucciti Park Occupiers essentially picked the wrong path in life.  Stating that he doesn’t know of any engineers who are unemployed but can see why the Liberal Arts crowd is unemployed and angrily protesting because well, it is a field without a promising future. Wow, again. So if I wanted to get into Zell’s industry, which is Real Estate investment, then I could get an automatic job because it would be the correct industry to flourish in? I mean, I can say that I have definitely been a networking, go-getting, roll up the sleeves and get creative kind of a girl- but that does not (in this type of economic climate) lead to a promising anything.

So, where exactly is Zell coming from with the ‘ohh, you picked the wrong industry, so suck it up’ attitude that is essentially, grody. What about my industry, the legal field, that is currently plagued by the lack of opportunities and/or long-term career prospects. Last time I checked, being a lawyer in America was pretty much a parent’s dream come true for their child (despite all the negative press and/or cultural image- yay to good lawyer jokes- associated with the legal field). Yet, I don’t have an attorney job. I have friends who do not have jobs either and they have looked and looked and looked to no end. So this is not about being lazy Mr. Zell, it is about working together to get out of what seems like an indefinite financial hole.

My favorite kicker was that he stated that the problem is lack of proper education in America and then proceeded to ask the government for aid in funding a training program at his Chicago-based production plant.  That is not much different than Occupy asking for a break from the government too. Occupy is about TOO BIG TO FAIL except that the ‘TOO BIG’ is America itself and not just the financial institutions. Occupy is, to some extent, about telling the rest of the nation that if you want a brighter future (and a future where the younger population can actually contribute to the imminent Social Security problems we will eventually have due to baby-boomer retirement) then BAIL US OUT! It is about asking the government to stop squeezing and pinching and making it difficult to stand on our own two feet.

I admit, #OurAmerica is NOT what it used to be. The times have changed and we can no longer just expect to be handed opportunities at certain points in our lives (like a promising job upon law school graduation) because the ‘dream’ has shifted and the white-picked fence may not be so white anymore (no pun intended) and we can’t afford those 2.5 kids we wanted to have (I can barely pay my bills yet alone feed another 2.5 little mouths) BUT given the shift, people do expect a certain compassion with the fact that a lot of people are working very hard to get permanent jobs, are struggling to pay their mortgages, are struggling to pay their student loans, are actually thinking way outside the traditional box, and are struggling just to get by, YET where is the aid? If the 99-Percenters are the weakest link in the American financial circus, then everyone needs to understand that you are only as strong as your weakest link. If the 99-Percent is  given the blind-eye, then well, we all fail. Whether you are a 1-Perenter who feels ripped-off due to your tax bracket (dude, at least you have a good capitalist job) or a 99-Percenter who feels ripped off due to interest rates on your student loans (hey at least you had the opportunity of going to school), we are in this together and we need to stop arguing the 1/99 and come up with a solution that is not tarnished by a politically-biased, smoke-in-mirrors agenda.

Will I stop reading the LA Times (Zell-owned), No! but do I feel better, YES!

Error: Twitter did not respond. Please wait a few minutes and refresh this page.